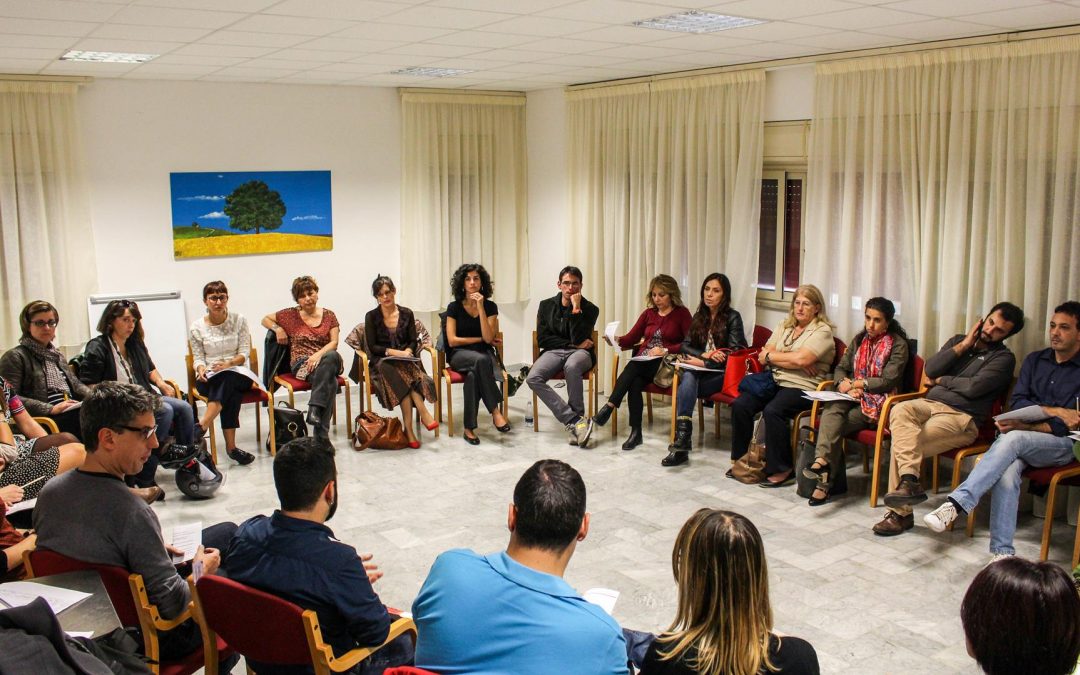 In 2014, Fondazione CON IL SUD carried out eight projects against school truancy and early school-leaving in the city of Palermo, through the Bando Educazione dei Giovani (Call for Youth Education) 2013.

The interventions engaged almost the entire context of the city, including 43 bodies from the third sector, 10 public bodies and 5 profit organisations. Furthermore, it involved about 6,5000 students, 500 teachers and 500 families. The two-year activation period of the projects has come to an end; speakers from the eight partnership networks have gathered together multiple times to share what has been achieved, focalising on strategies and processes, along with strong points and challenges.

From this discussion, the desire to create an event open to the public was born. This event would circle around ideas and proposals that would contribute to the design of efficient strategies, in order to activate processes of local development. The workshop would begin in the morning with a short presentation of the findings from the eight projects, followed by speeches on some crucial aspects related to school truancy.

The conference “School Plus. From truancy to school inclusion: Ideas and proposals” was held on November 7th 2016 at the Diaconal Centre “La Noce” in Palermo. The day was the result of collaboration between: CESIE, Libera Palermo, the organisations involved in the projects “Tutte le strade portano a scuola” and “IN.C.L.A.S.S.E.”, along with the coordinators of the six projects co-financed by Fondazione CON IL SUD in Palermo with the funding line from Educazione dei Giovani 2013.

Over the course of months, the coordinators of the eight projects gathered together to analyse the strong and weak points, the wining strategies, and the challenges of the projects. These projects were simultaneously carried out in seventeen areas of the city of Palermo. An important shift of perspective emerged from this self-evaluation: to take action against school truancy and early-leaving, recognising and reclaiming the necessity of long-term collaboration between public institutions and the third sector, and targeting the implementation of interventions that don’t act on emergency but rather have the intention of triggering processes of school inclusion.

Here’s the video of the interviews with the eight coordinators.

The event was received with interest and participation. Altogether there were 130 participants, belonging to about 50 different groups between organisations of the third sector, school institutions, and local universities.

In the afternoon, three work tables were created which promoted the discussion of three topics:

At the end of the day, the table participants came to the plenary, sharing what they had discussed. Here is a summary of what emerged.

FIRST TABLE: The actors’ role in the educational community

The first topic table “The actors’ role in the educational community”, composed of about 14 participants, between students, teachers, third sector workers, psychologists and educators, was guided by Amico Dolci. He’s an educator and musician, an expert in non-violent action methods, and a workshop coordinator for the Reciprocal Maieutic structure. It was also guided by Giuseppe Rizzuto, project coordinator, trainer within the intercultural-educational sphere, and Chinese language and culture teacher.

The work was based on the formulation of some key points, starting by reflecting on some of the most important words that are used daily but which aren’t often reflected on, such as ‘teach’, ’educate’, ‘transmit’, ‘communicate’, and ‘play’.

From these initial reflections, the significance of the role of the educational community was explored, underlining the importance of the diversity in actors and spaces that make up a community: from students to young people, from family to teachers, from educators to doctors, from schools to places of worship, from funders to production activities. Attention was then focused on the importance of listening, reciprocity, sharing, integration, emotions, comprehension, and community development.

Following this, the participants were involved in writing up of a list of educational focal points along with a list of activities to carry out within the educational community in order to make school a more desirable place.

These are the main reflections that emerged:

Lastly, in light of each person’s reflections and the discussion, the group came to five key recommendations that take into account what emerged:

The mutual relationship in listening is essential; just like in a musical relationship, how it’s possible to simultaneously express oneself and listen to others. Listening is a prerequisite for communicating.

SECOND TABLE: New ways of understanding school truancy in the city of Palermo

The second topic table “New ways of understanding school truancy in the city of Palermo”, composed of 14 participants between teachers, third sector workers, psychologists and educators, was guided by Carmelo Pollichino. He is a project manager specialised in project writing in the third sector, and a trainer and facilitator in non-formal learning courses. It was also guided by Giusi Tumminelli, sociologist, educator and developer. The group’s diversity was valuable right from the beginning and it enabled the particular argument to be discussed from different perspectives and ways of understanding.

Through the task, starting with key concepts such as inclusion, participation and orientation to the future, the clarification of the concept school truancy was reached. This term is intended in its generality as the phenomenon that sees a part of the student population not achieve the learning results which they seek. This concept is consequently closely linked to some phenomena to take into account, such as abnormal misses, school drop-out, early-leaving, failing, repeating, learning delays and debts.

On the basis of these important reflections, a draft method was constructed which is based on the transition from an emergency-based approach to a developmental approach. It is also based on changing the point of view on the topic: take action not by thinking about “the school truancy emergency” but rather about the possibility of “developing pathways of inclusion”.

At this point, the important step is to understand how to move from an emergency approach to school truancy, towards an approach oriented at the development of social inclusion.

The question which was asked was therefore: “How do we move from an emergency approach to school truancy, towards an approach oriented at the development of social inclusion?”

The perspective was therefore reversed, orientating it towards the future of each person, with a positive approach and focalising attention on different aspects:

A future “vision” was proposed for the approach to truancy that involves the region (meant as a city, metropolitan area) which pushes for school. School should therefore be considered a “stronghold” of the culture, a promoter of good examples and practices, able to highlight, support and value talents and to work in continuation between different layers of school (first or second cycle of education).

The proposed “vision” introduces the theme of emotion: to connect with the regions so that they listen to the dreams of young people and connect them with the opportunities offered by the area. A widened educating community that also involves the economic actors present in the city can contribute to the realisation of a project integrated with social development and inclusion.

It therefore becomes necessary to also use a different vocabulary. Some proposed terms to include in the new glossary on school truancy are: emotion, dreams, talents, continuity.

THIRD TABLE: The related planning within the educational sphere

The third topic table “The related planning within the educational sphere”, composed of 26 participants, between teachers, psychologists, third sector workers, school directors and educators, was guided by Cristiano Inguglia. He’s a researcher of the psychology of development and education, project writing teacher, and trainer in formal and non-formal learning courses. It was also guided by Claudio Arestivo, who has been active in the social politics sector for about 10 years. He’s passionate about the construction of networks for non-profit organisations and about participative processes.

The task started with the reflection of the concept of participative planning. The discussion led to consider the two words separated. The term “plan” can be perceived as a mutual idea for action. It could also be long-term and not linked to a particular project, which starts by analysing the context in which it occurs, the participants, and the true need for which action must be taken. The term “participative” was instead connected to the individuals’ personal sphere, to the willingness of those who want to do something, and to the political sphere. For a meaningful intervention, the involvement of all parts, even the political ones, is important.

Successively, the next focal point was the tools that could be put into place in the future to realise the participative planning in an educative sphere. In general, project writing is talked about when a project is being prepared and this determines the beginning of ad hoc networks. In order to have an intervention that is not only accurate but also continuing, it would be useful to first create the networks through various subjects, by observing the available resources and the challenges of the context.

In the case of project writing that involves schools, it’s important to differentiate the interventions based on the school grade, given that the needs of students are different.

Concerning the projects, in some cases it can be useful not to focus on purely educative interventions but also on those that are the link between participants, which trigger the construction of ideas and group spirit.

Reflecting on the strong points of participative planning, it can be said that the past experiences and dedication of some people often represent the road to success for projects. On the other hand, one of the typical challenges is the lack of communication at various levels which slows down and undermines the cohesion of participants.

The common idea that arose from the discussion task was that the only planning which has sense is that which includes participation and sharing. Project writing understood in this sense can be coherently inserted into the school context, being carried out to also meet the formal school learning structure. This leads to a distinction in the interventions based on the school level and on the context of the school. It’s important that the region is involved so that there’s not a separation net between inside and outside of school, by providing interventions that take school out of its structured place.

Communication must take place on many levels including that of basic word of mouth and informal conversation. In this way, the needs of the context in which the work is being carried out can be better heard.

We thank everyone who has participated in meetings and contributed to the organisation of the conference in the past few months, along with all of those who joined us on November 7th. We hope that the points contained in this summary are useful for the planning of new interventions within the education field in the city of Palermo.

In conclusion, here are some important reflections shared with the audience by President Borgomeo.